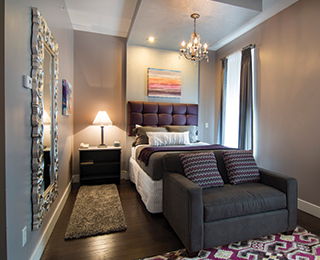 The Gould Hotel in Seneca Falls builds upon the building's rich history of social importance in the Finger Lakes Region with a unique and fresh feel. This modern boutique hotel and its exceptional restaurant have again become a vibrant social center and premier destination for guests in the quaint village of Seneca Falls. The Gould Hotel features revitalized architecture, contemporary cuisine, and all the modern amenities one would expect from a four star hotel. Whether you seek to celebrate your next event in our elegant banquet room, gather for a stress-free meeting, relax in one of our guestrooms, or simply enjoy fresh and delicious food in our restaurant, The Gould Hotel is your perfect destination. For business or pleasure, the staff at The Gould Hotel is fully prepared to meet all of your needs and expectations. We hope you'll join us for a truly memorable experience.

The area originally known as Mynderse Mills officially became the Village of Seneca Falls when it was incorporated on April 22, 1831. Ansel Bascom was selected as the first President or now Mayor of the Village. As early as 1841, the Rochester-Auburn railroad system opened the door to the world market for goods manufactured in Seneca Falls.

Seneca Falls was also gaining a reputation for social and religious reform: the Abolition of Slavery, the Underground Railroad, the temperance movement, and the Women's Suffrage Movement were among issues supported by local residents. On July 19 and 20, 1848 the first Convention on Women's Rights was held at the Wesleyan Chapel on Fall Street in Seneca Falls. Organized by Jane Hunt, Elizabeth Cady Stanton, Mary Ann M'Clintock, and others. It was the birth of the Women's Rights Movement.

Seneca Falls remained an industrial village well into the 20th century as the home of Gould's Pumps, Sylvania, and Seneca Machine.

In recent years tourism has become the major industry in Seneca Falls. Popular are the the Women's Rights National Historical Park including the site of the first Women's Rights Convention, the Elizabeth Cady Stanton House, the the National Women's Hall of Fame, the Seneca Falls Historical Society, the Seneca Museum of Waterways and Industry, and the Seneca Falls Heritage Area Visitors Center all in Seneca Falls. Additionally the local wineries, the Finger Lakes, and beautiful scenery of Central New York all attract visitors to the Village of Seneca Falls each year. The Village has recently received attention as the likely inspiration for the fictional village of Bedford Falls in Frank Capra's holiday classic movie "It's A Wonderful Life."